What happens when you bring a red and white striped t-shirt home? I suppose it depends on who you are. But if you’re anything like me, you immediately jump to visions of the whole family kitted out in Where’s Waldo costumes amidst a sea of red and white. 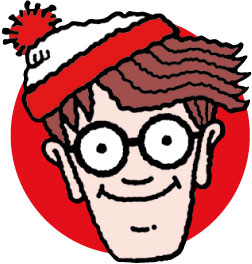 From there the daydream turns into a DIY fantasy – finding matching t-shirts would be hard, right? Maybe I should just sew all 4. After that, I’ll need to find us 4 pairs of round glasses and compile stacks of books. Should the books all be copies from Martin Handford’s Where’s Waldo series? Maybe I should knit Waldo hats for us all to match as well. Could I find us matching boots?

Several hours later, after way too much Googling and Pinterest-searching, I usually come to the conclusion that my daydream would take up all my free time for the next several months. Which suddenly makes the idea seem a whole lot less ideal.

Nonetheless, this time around I found an easy kids’ knitting pattern for a Waldoesque hat on Small + Friendly. It looked do-able if I ignored the fact that I’d have to learn to knit, so I bought two balls of yarn and a set of knitting needles.

It turns out a hat knit in the round isn’t the best project to start to knit with. After several false starts, I gave up and reverted to every fiber artists’ trusted first project, the dishcloth. Four dishcloths and many frogged rows later I came back to this pattern with my new found knitting and purling skills in tow. 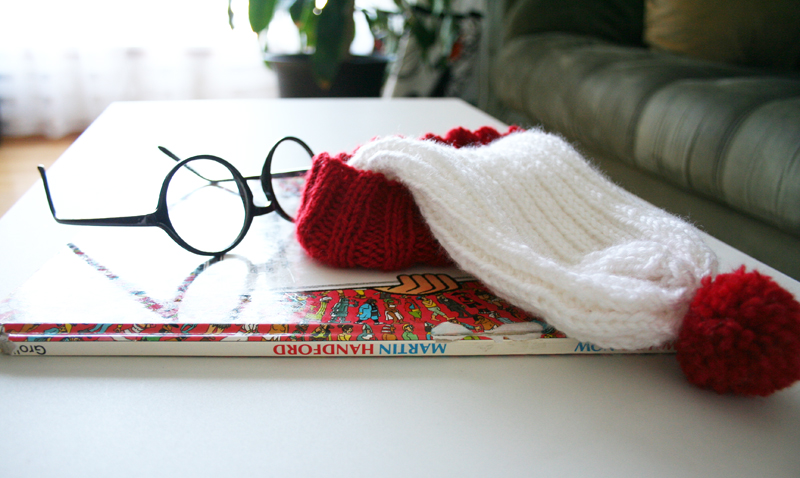 Before starting this pattern you’ll need to know how to cast on, knit, purl, purl 2 together (p2tog), and knit 2 together (k2tog). I ended up looking up the last 2 on Youtube to figure out how to do them.

Knit/purl as per the pattern until your work reaches 3.5″ long. Switch to white and keep going until the white is 6″ long, then start your decreasing/finishing.

The pompom is an absolute must, of course. I made mine by winding red yarn around the two handles of my can opener, then tying a knot around the middle and cutting the ends. It required a lot of trimming and came out a bit smaller than expected, but that’s just the way it goes!

Putting the costume together

I thought it would be hard to find a pair of Waldo glasses, but I lucked out. It seems that Waldo and Harry Potter share an optometrist, so I just tracked down a pair of costume glasses on VarageSale. Secondhand finds are the best – $1 for the win!

Waldo usually wears blue jeans, a brown belt, and brown boots. If you really wanted to get a slam dunk for your costume, try digging up a brown/wooden cane for bonus points. 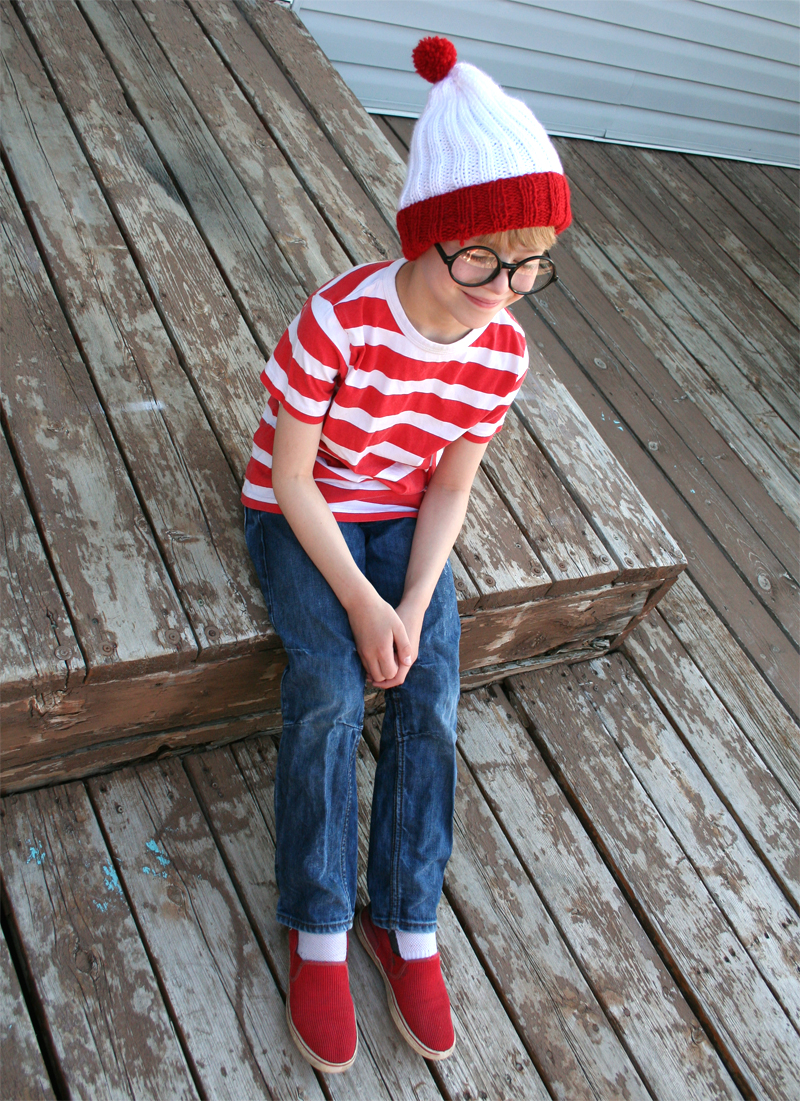