The Cosplay community has embraced Harry Potter with exuberance and enthusiasm. When I started looking into Harry Potter costumes I came across almost everything, from Luna Lovegood in her lion’s head (priceless) to a golden snitch and Moaning Myrtle (with toilet seat!).

Of course, there was always a huge variety of Quidditch costumes, from the storebought to the painstakingly handcrafted. There seem to be several Quidditch camps – those who prefer the original first-year robes to Krum’s from the World Cup or practice robes from year 6.

And if you didn’t know there are multiple Quidditch costume styles, you’re not alone. I only figured it out once I started planning my own costume. Here’s what I’ve found so far:

For the first 2 years (Philosopher’s Stone and the Chamber of Secrets) the Quidditch robes looked a lot like the general robes, with the exception of being in house colors. They were lined in the house accent color, with brown leather ties to match the brown leather pads worn by all teams. Don’t forget to add in your house sweater and socks to complete the ensemble!

Jany Temime became the new head costume designer in year 3 (Prisoner of Azkaban) and gave the robes a sportier overhaul. Featuring performance fabrics, sporty stripes, and big jersey numbers, these costumes are more detailed than their predecessors. These robes lost the contrast lining as well, but keep the house sweater and socks in the mix. The Gryffindor robes show a star underneath the numbers on sleeves and back – but Slytherin has a snake in its place. All Gryffindor players have the star on their robes, so it doesn’t seem to denote position.

2019 Update: “Harry Potter: The Character Vault” puts this debate to rest. Numbers were added to the Quidditch costume when new head costume designer Jany Temime was hired on for Harry Potter and the Prisoner of Azkaban. “Each number tells which position you are playing, whether you’re a Beater or Seeker or a Keeper. In tryouts, you put on the number of the position you want.”

Malfoy, Harry, and Krum were all given the number 7 as seekers for their teams. My best guess as to which numbers are which position is as follows:

Year 6 brought a third costume variant for tryouts. Although the half-jersey-half-robe seems to cut players off at an awkward spot, I have a great fondness for the tryout scene. Who can forget Ginny telling everyone to ‘shut it’ or Hermione casting Confundus on McLaggen so he doesn’t take Ron’s Keeper spot? All teams have the same gray pants/top under their house robes for practice – you’ll notice the stripe down the sleeves and pant legs features all 4 house colors.

The Quidditch gear is, to me, a huge part of the costume. It’s what makes it obvious that you’re on the team instead of walking around in house colors to represent. In most cases, the gear is made of brown leather. You can use black as well if you’re going for a year 6 Slytherin costume or as Krum in the World Cup tournament. The gloves are a bit different depending on the year, but the other pieces seem constant throughout the series.

And a gigantic graphic

I spent a few quite pleasant evenings putting all of the above into one huge, long, somewhat fabulous graphic. I’m not sure if Ron would say “bloody brilliant” but that’s what I’m picturing right now as I pat myself on the back. That counts, right?

8 replies on “A Quidditch costume reference”

Thank you for this page. I found it by accident while looking up things about making some Potter cosplay. I’m doing quidditch gear first ( out of leather of course ) and I’m looking to be as screen accurate as I can. Of course I will need the robes and a Nimbus but that is a later decision. I honestly can’t quite figure out which year quidditch costume I like more but I am kinda leaning toward the outfit with the stripes and numbers. I am still in the research phase on all this but your page has jump started my search with links that have even further links.
Thank you for the time you put into your pages and instructions and free downloads.

Bruce – you are so welcome for this page. I was doing a lot of this anyway for my own costume, and am so glad that someone else can use my research too! I did put together a free download of a pattern for the Quidditch armor/leather gear – I found that the hardest part of the whole thing. https://sweetmagpie.com/diying-your-own-quidditch-gear/ I went with the stripes/numbers robes myself, and was really glad I did. Though the bit of extra detail is more work, it looks smashing when it’s done. Best of luck – and do let me know how it goes if you get a chance! – Martha

Hi Martha. Just wanted to update you on my progress. I haven’t actually started the quidditch armor just yet. I have been a bit busy still going all in on the research aspect ( if you call watching the movies “research” lol ) but I am rather stuck on probably the biggest aspect: Ravenclaw’s Colors. Perhaps you can help. First off, the books have it as Blue / Bronze and the movies go with Blue / Silver. Frankly I am partial to Blue / Silver since my cosplay is about being as screen accurate as possible. Plus I like the silver over the bronze. I see from your photos that is what you chose on yours and it looks pretty awesome. I found this article on the matter: http://www.not-literally.com/2012/07/26/the-essential-ravenclaw-color-debate/
The other one I am having a hard time with is exactly what shade of blue? I’ve seen dark blue / navy blue to some rather bright ones.
Just wondering what led you to your specific choices. Also, I would be happy to send pics via email. I’ve included my email in the comment field below. Feel free to contact me there.

Hi Bruce – great to hear you’re having such a good time researching. The Ravenclaw colors were a sticking point for me as well, but in the end, it came down to expediency. Bronze fabric and trim are rare, and even if you can find it, comes in a variety of shades that may or may not be bronze. Silver, however, is fairly standard and easy to find. When shopping for costume material I looked for both and had much better luck finding silver. Also, since bronze is used in the books but never ‘seen’, I liked the idea of sticking with the movies’ color palette. The shade of blue is also very tricky since there seems to be a variety of shades. Even on the official merchandise shop, the blues range from navy to a bright primary blue (https://www.harrypottershop.com/collections/clothing/ravenclaw). After scouring the web I decided on something between navy and primary blue due to my preference since there didn’t seem to be a consensus on the exact color. My friend Kim sewed the robes in Kona cotton, shade Nightfall. I was really happy with the color and depth. The silver is a very thin window-protecting covering from Michaels that we cut to shape and attached to the fabric with iron-on interfacing. It worked better than I’d expected!

Thanks for commenting! Below are some links that could help with your 3rd year robes:

Love this. Been trying to make a year 6 quidditch costume for my 10 year old daughter. Many people just put 2 straight flaps down the back of the jersey, but you noticed the shorter middle flap that gives it more flair. Have you found any patterns that show that effect?

Hi Stephanie! Unfortunately no, I haven’t found any patterns that use the shorter middle “flap” in the year 6 Quidditch robes. My friend Kim designed ours from scratch and we haven’t made a pattern from it. I took a quick shot of the back of our robes to give you an idea of how to do it. We added a box pleat at the waist, and then in the pleat we added a shorter panel. The official HP robe pattern (Simplicity 8723) isn’t made for Quidditch but could be modified. I hope this helps! 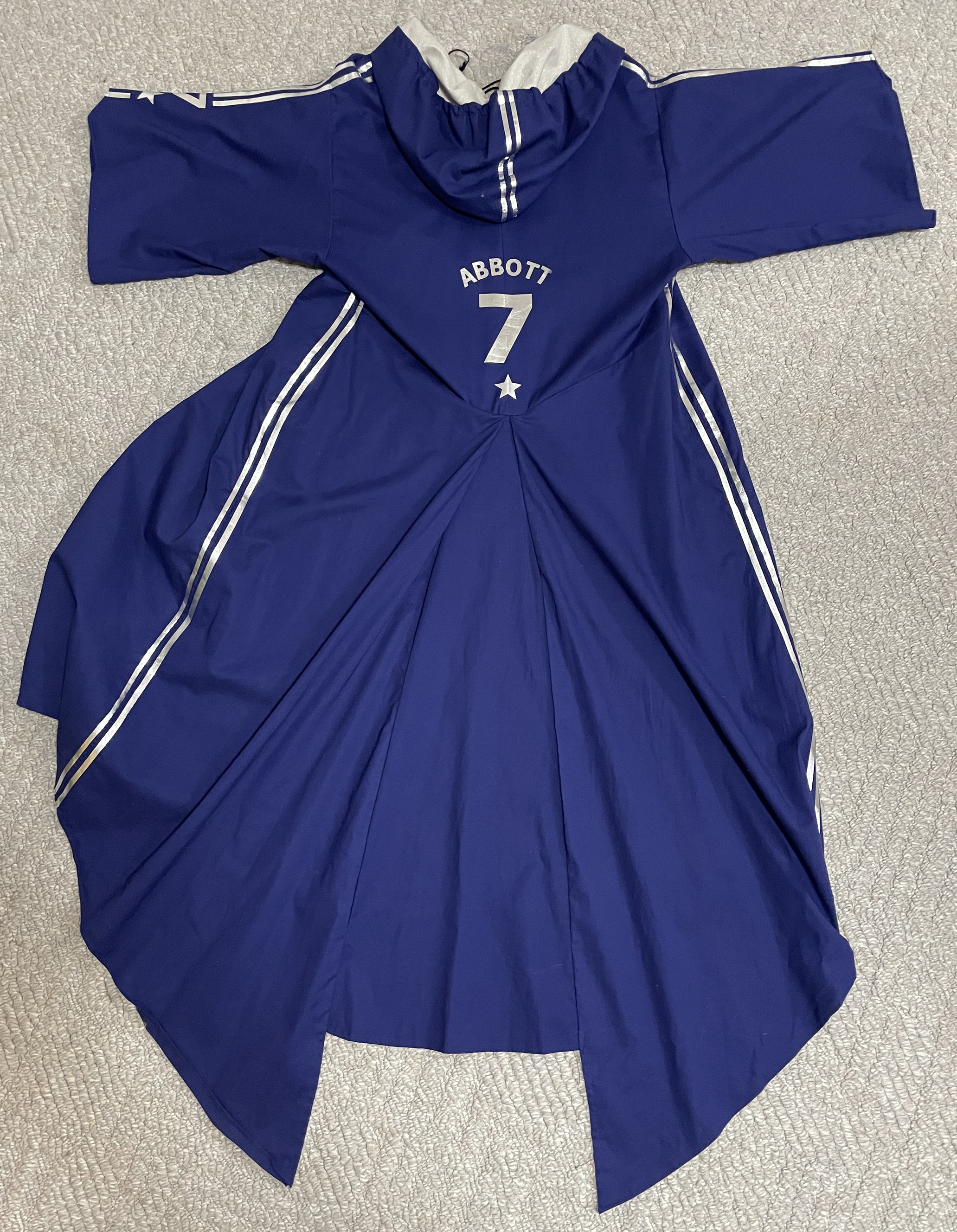